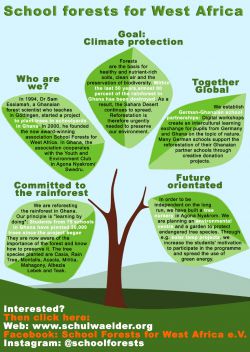 We are looking for

School Forests for West Africa e.V. has been working for environment protection and
rainforest preservation for over 25 years already. This film provides an overview.

Schulwälder für Westafrika e.V. supports North-South partnerships through reforestation projects on West African school compounds in order to stop the further destruction of the rainforest and to contribute to the protection of the environment through:

-          Environmental education through presentations in German and Ghanaian schools

-          Further trainings for teachers in the environmental education of global learning

-          Intercultural exchange with partners in Germany

Schulwälder für Westafrika e.V. is a non-profit-organisation; all its members work voluntarily. The focus of its work is in Germany and Ghana. In Germany, we could inform many schools about the problematic of the rainforest and link them through partnerships with Ghanaian schools. In Ghana, we have planted trees on almost 70 school compounds – these schools are also linked to German schools.

History of the association

The alarming deforestation of tropical rainforest is one of the biggest global problems today. West Africa, for example, has lost over 75 percent of its original forest. During the last decade, the Sahara desert could extend by 2,5 kilometers per year to the south. The rainforest in Ghana shrank within 50 years to 1,4 Mio ha. – originally it had been 8 Mio ha. Therefore, the deforestation is one of the most urgent problems of the country. Reforestation is indispensable if we want to offer a secured future to the children and to the country.

Due to an initiative of Dr. Sam Essiamah, the project “trees planting on Ghanaian school compounds” was found in 1995 which aims at the forestation of school compounds through German-Ghanaian school partnerships. The project was based on the idea that pupils should learn how to plant trees and care about them in order to develop a sense of responsibility for the high significance of the rainforest. This is how the population should change its attitude towards the country’s forests as well. Children should learn theoretically and practically how to take care about trees in order to secure their sustainability and to contribute to the protection of the rainforest.

Focussing on the project’s objectives, school children between 6 and 16 years of age were encouraged to plant trees on their school compounds and care about the trees which give shadow and which protect against dust and erosion. Further advantages are: aesthetics, protection of houses against violent thunderstorms and protection against housing constructions on school compounds. Depending on the size of the compound, the children plant 300-400 seedlings with the help of their teachers.

The project started in 1995 with only four primary schools in Ghana. Now there are 70 schools taking part in the project. There had been some first success:  The firstly planted shadow trees are several meters high. One of the founding schools won in the year 1998 the first prize of the reforestation program of Ghanaian government because of its excellent commitment.

The project has become known in Germany through events, reports in newspapers and magazines and above all through advertising the school partnerships. Apart from school partnerships, some institutions such as fair trade shops or church parishes entered sponsorships for school forests. There will be a small billboard at the edge of each sponsored forest with the name of the sponsor.

With the support of a foundation, a land (size: 10 ha) could be bought in Ochiso in 2002 which will be used for a tree nursery, a botanical garden, a herbs garden with traditional healing plants as well as a people’s forest. The latter one is free for everybody to plant a tree (against donation) with the name of the sponsor. Moreover, an environment centre will be established, further trainings for teachers will be offered and the intercultural exchange with the German partners will be continued.

In May 2004, the association won the GLOBO:LOG prize. An office with internet access was opened for the association so that school children from Germany and Ghana could get in contact with each other. The project is named “Chat of worlds” and is about topics like environment and development at schools, first in Niedersachsen and Nordrhein-Westphalen, later all over Germany.

On first March 2005, the network „School forests for West Africa / Children’s forests worldwide“ was honoured  as „Education for Sustainable Development“ by  the German UNESCO commission and the German National Committee of the UN decade. The association Schulwälder für Westafrika e.V., since September 2000 a registered society, in Göttingen, but with its principal workplace in Ghana, and the partner association in Ghana „Youth and Environment Club“ lead the project.

Common goal is the protection of resources, concerning forest and tree planting, with the focus on the global context (economically, ecologically, culturally, etc.).

Therefore the network aims at:

-          Intensifying the collaboration and exchange with Ghanaian partner organisations, particularly in the field of global learning and intercultural competences

-          Intercultural exchange with the environment centre in Ghana